Toronto Taste was a gathering in June of some of Toronto’s finest chefs in support of Second Harvest. Second Harvest is the largest food rescue organization in Canada. They gather surplus food that would normally be going to waste and use it to feed hungry families. They have gathered 127.7 million pounds of food since its inception in 1985

I went there to explore the culinary world all in one big happy food fest.

The event was being held at Corus Entertainment down on Queen’s Quay East. The ticket stated elegant attire so I dressed to the nines. 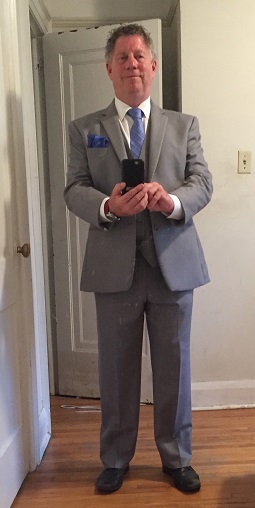 When I got there, of course, there WERE some dressed elegantly, but most were in the usual Toronto street attire. However, I think that is why Chef Rob Gentile of Buca restaurants was all smiles when I asked for a photo with him. He knew class when he saw it. 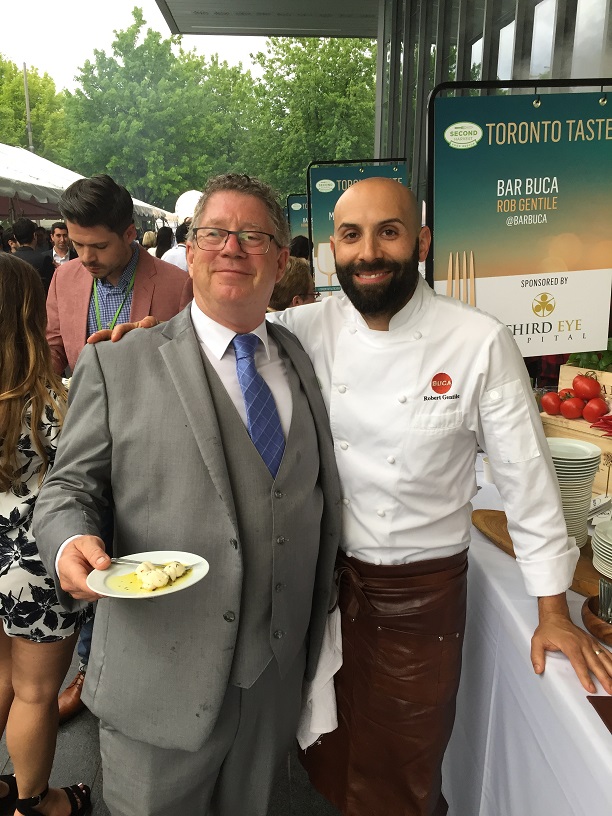 The setup was in a U shape. I started at the entrance and lined up for the first arm of the U. I thought it was fitting that the first booth was Harvest Kitchens. This is a training centre run by Second Harvest to give people who are disenfranchised the skills to work in a kitchen. This is a real kitchen that prepares food for real customers. 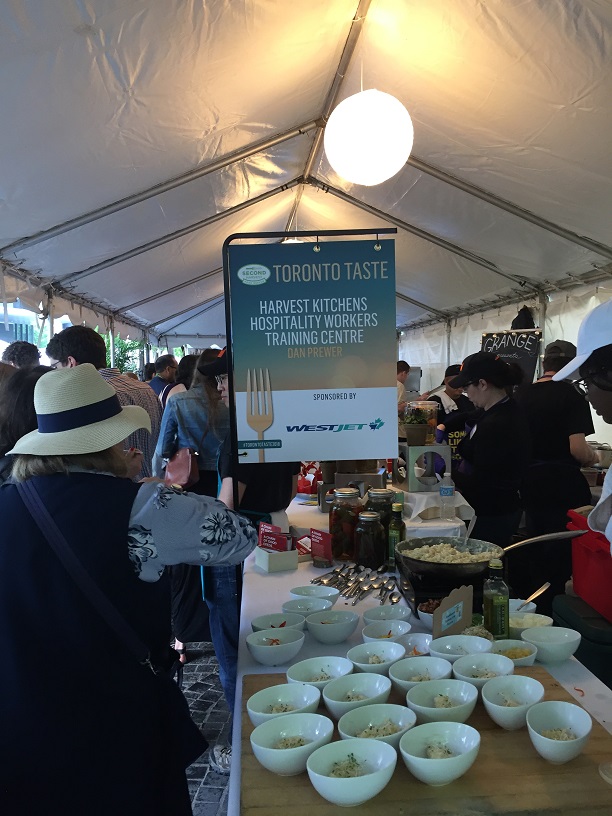 I tried to chat with some of the chefs but the line up was long and they were working hard to keep up with the demand. Chef Manuel Vilela of Chiado had a scrumptious Salmon Tartare tasting. 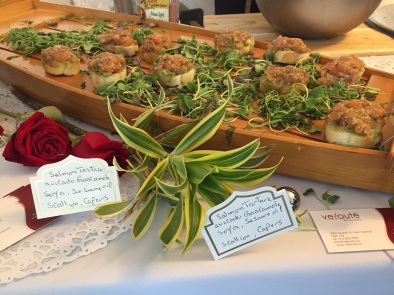 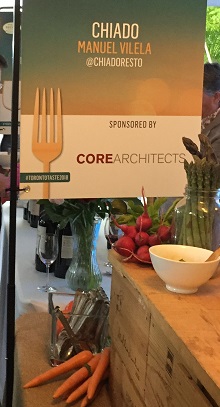 George Brown College, Hospitality and Culinary Arts were represented. I tried to get a t-shirt but they were only for volunteers. Next year. 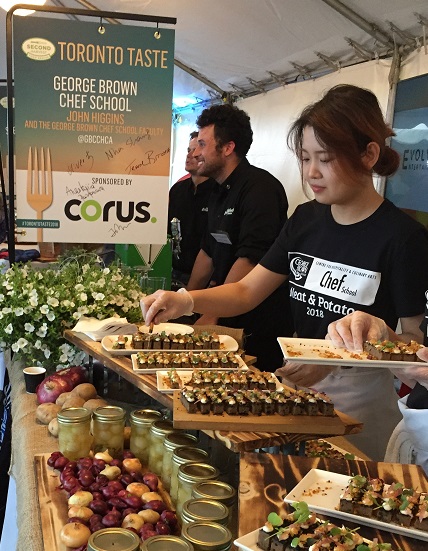 Really wanted to chat with Chef Michael Hunter on Antler. He was centre stage directing his staff while plating. But he did stop for a photo 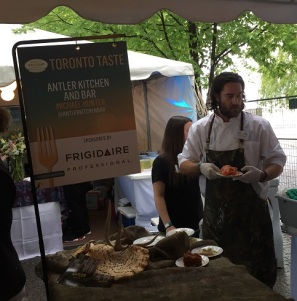 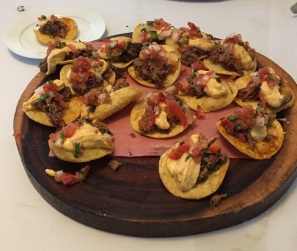 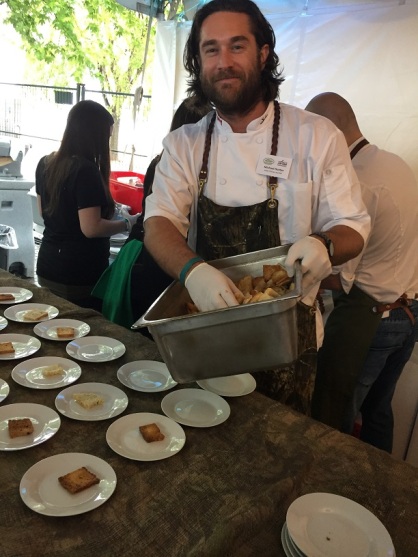 He was also doing a salmon tartare dish 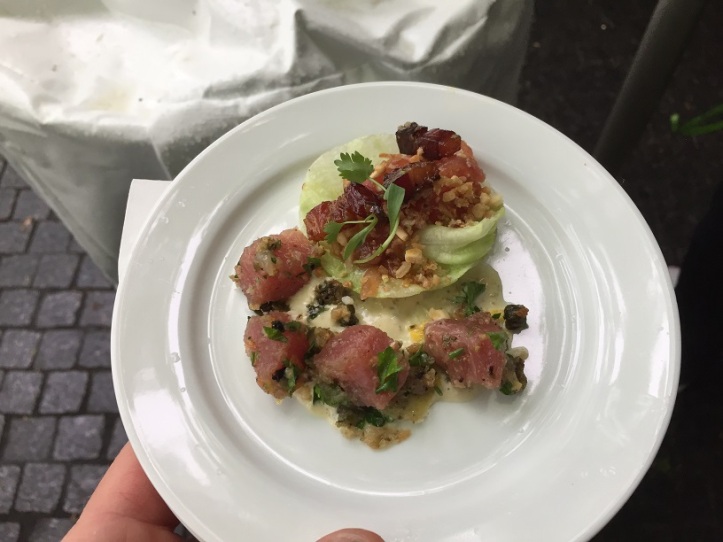 Next up were some tasty shrimp rice balls call Arancini 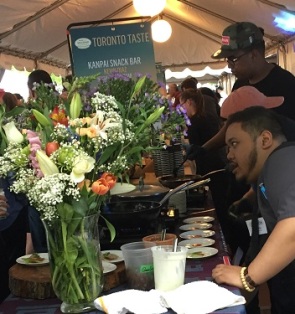 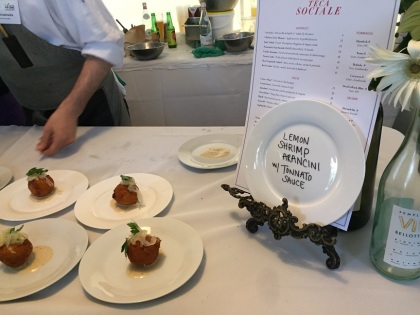 I should mention that every 4 or 5 booths there was a beverage station featuring wineries, cider houses, craft beer and coolers. After a refreshing cider, it was time for some BBQ pork bellies from Momofuko. 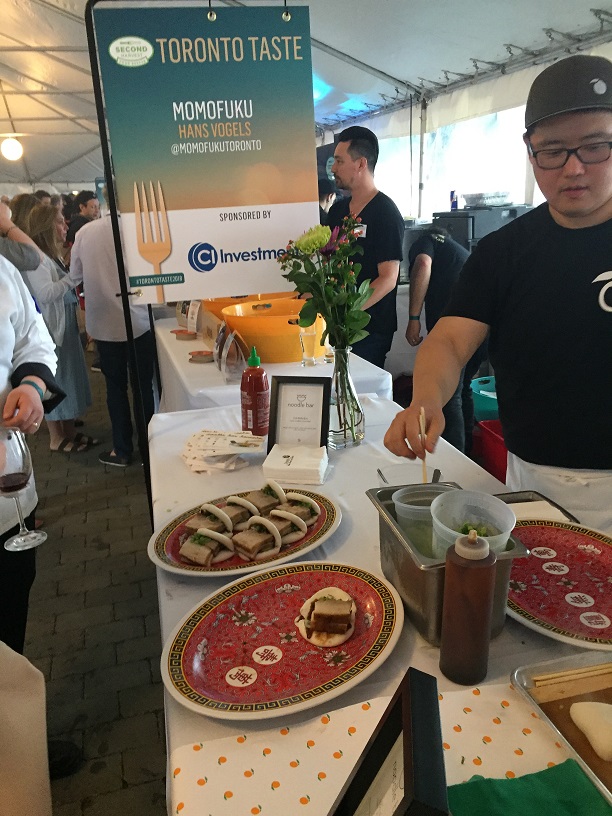 And the line continued…. 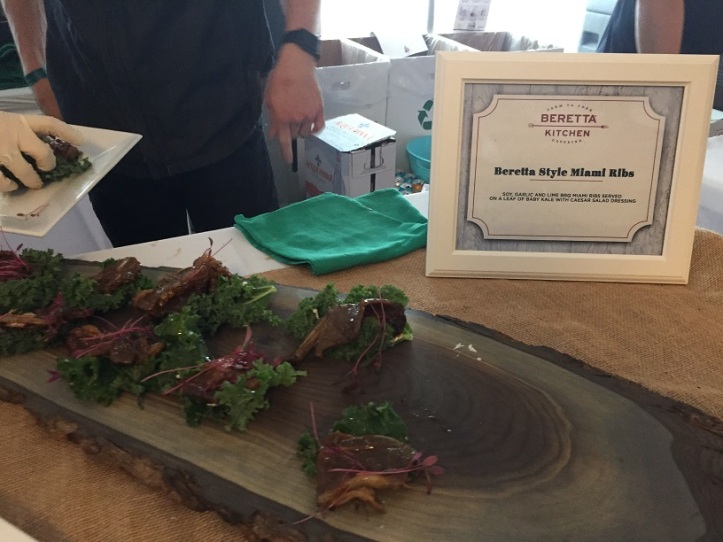 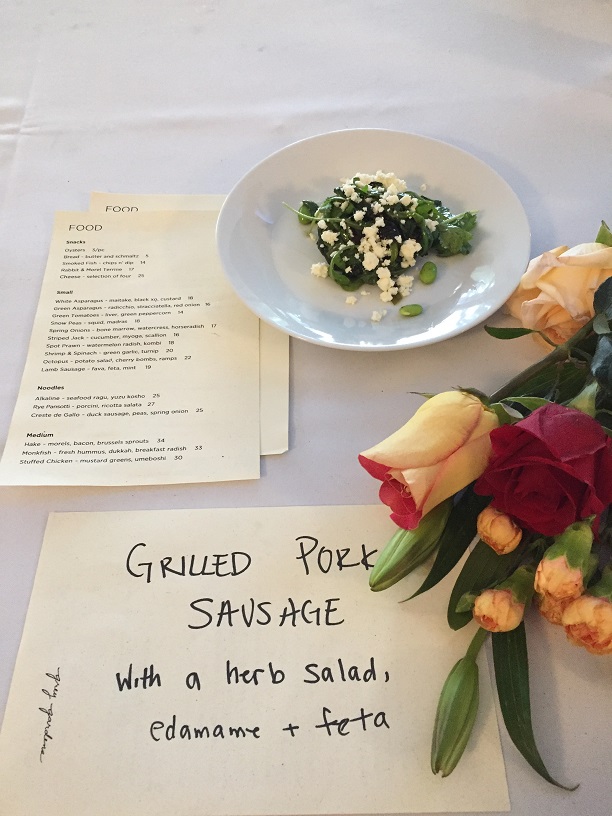 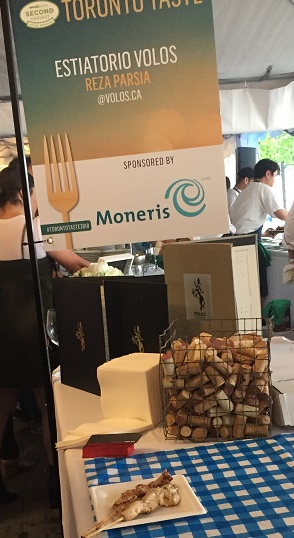 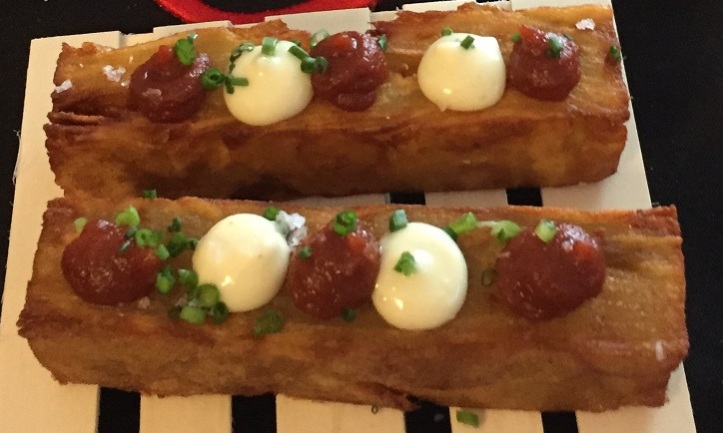 I finally made it to the end of the line. That’s when I realized it was a U shape. There were 2 more sections to visit. And I was stuffed. The tastings are deceptive. You think it is a small portion but after 10 or so, you’ve had a meal.

So I let out a notch in my belt buckle and forged ahead. Farina had a simple pasta and delicate chicken broth 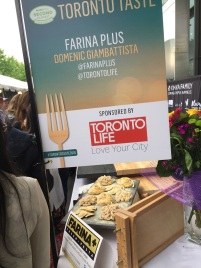 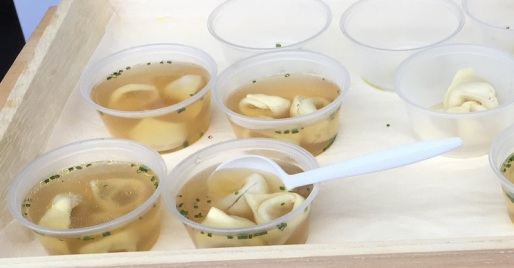 The sushi chefs were putting on quite the show with jovial shouting of each order, welcoming people to their table and scorching the salmon. 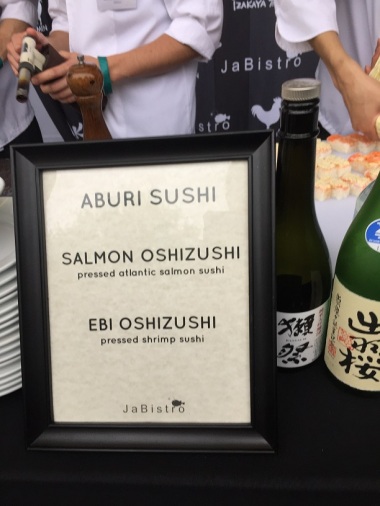 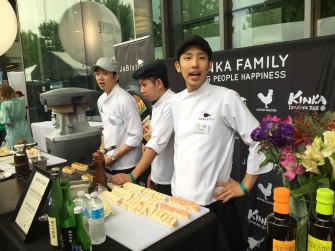 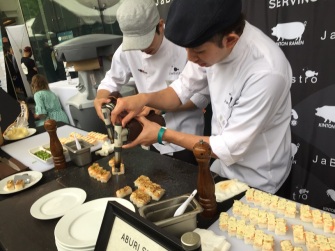 I was on the final leg. By this point I was just looking at the creations. Then I spotted the Albacore Tuna with pickled carrot on a carrot chip. “Okay, I’ll have one more tasting” 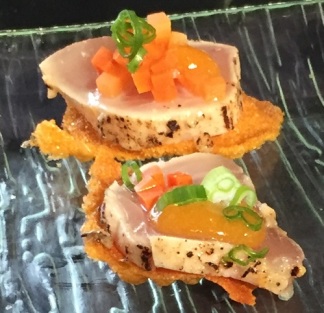 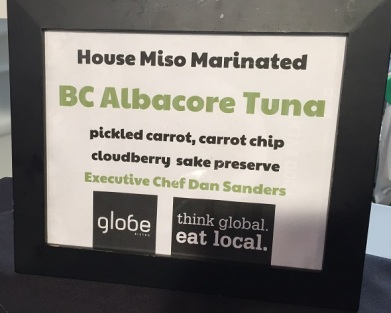 I finally reached the end (of the food and drink). Two last temptations awaited me – 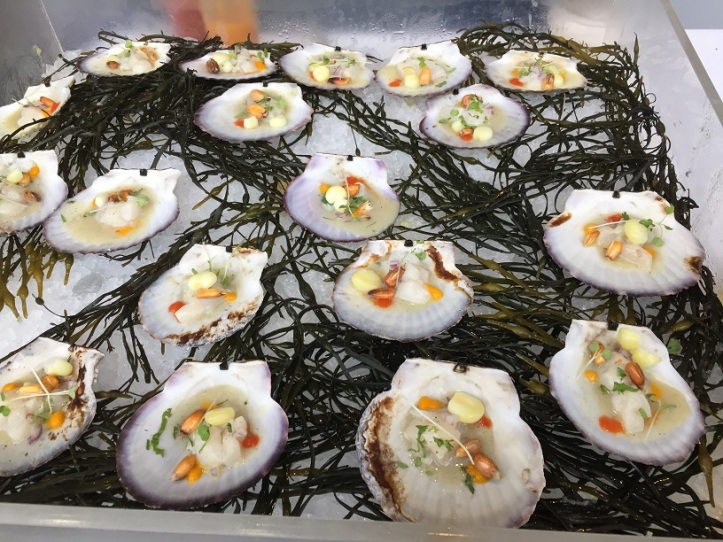 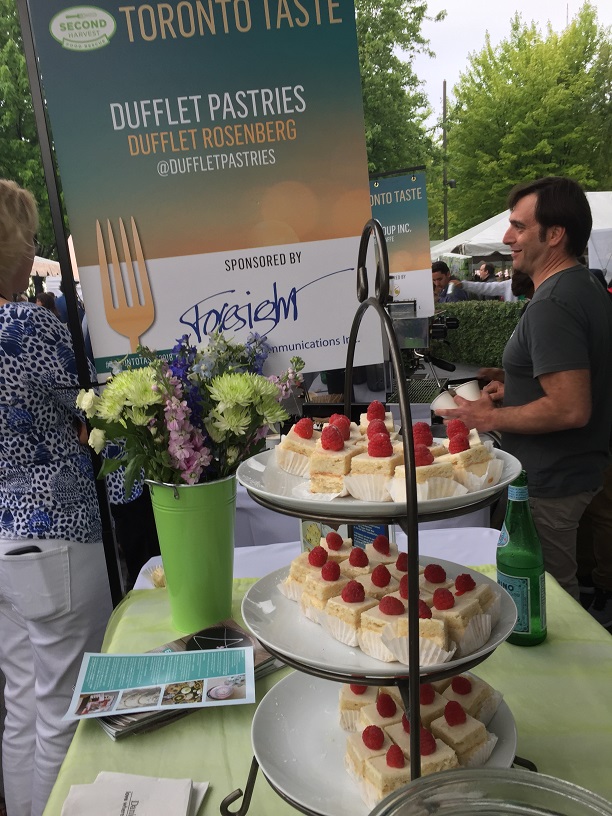 I wandered into the next room, which had the auction items. I had passed the Live Auction room where people were bidding on fine wines. I looked around at the silent auction items and put bids down on 2. I got a call a couple of days later to tell my my bids had won (I was the only one to bid on them). 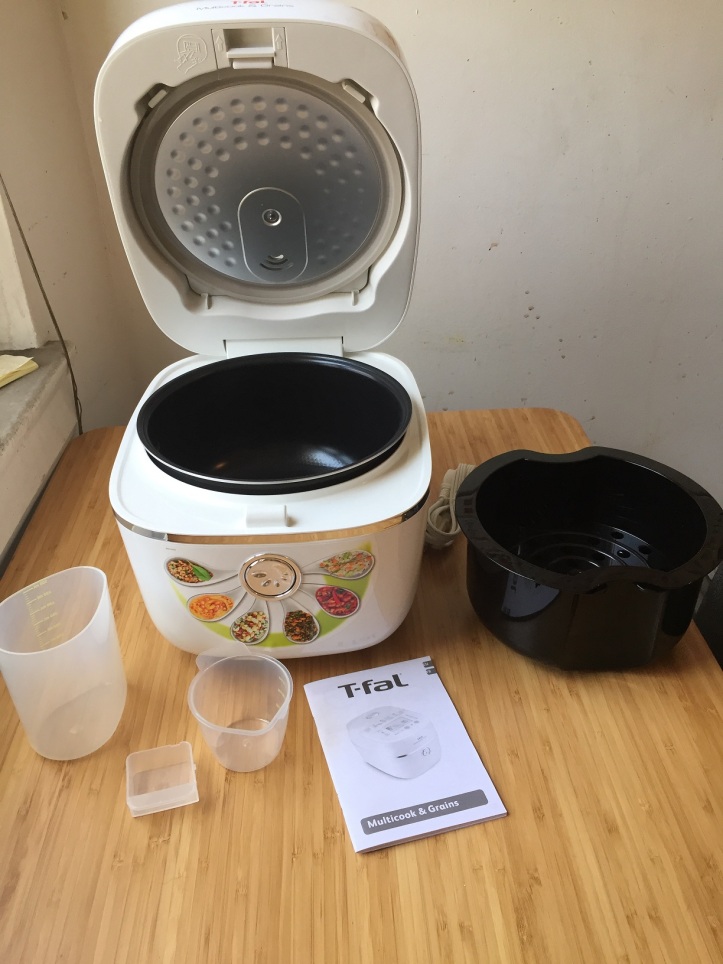 The second one really interested me. It was a Foods of the World basket with cookbooks, spices and All Clad utensils.

These will certainly make for some interesting future blogs so stay tuned.

I received a nice Thank you email from Second Harvest. I drove up to their location to pickup the auction items. Had a nice chat with the person who organized the silent auction. I felt good about supporting this worthy group. As someone who rescues dogs, I felt a camaraderie with people who rescue food. Makes for a better world.